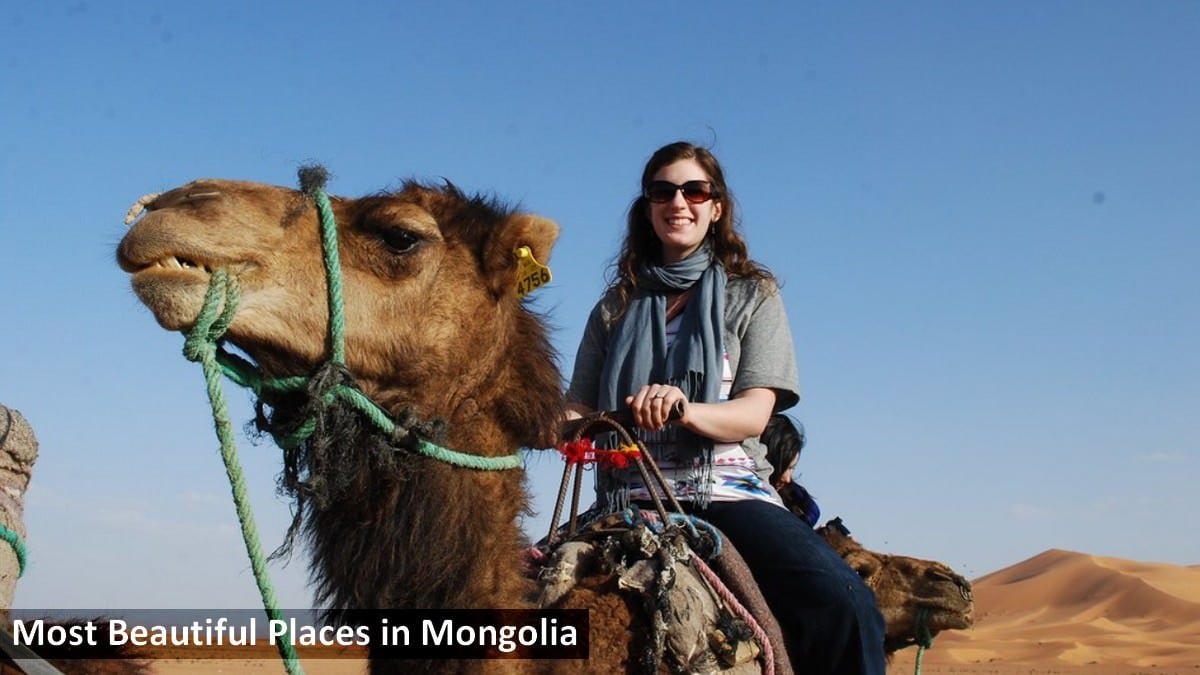 Mongolia is located Central Asia, bordered with Russia and China. Nowadays Mongolia is one of the 10 best countries to visit. And the following information to allow you to get best information about 10 most beautiful places in Mongolia.

Great Land Stone Mountain located in Gobi-Ugtaal and Bayanjargalan soums of Dundgovi province. This is the largest granite region in Mongolia.

Ikh Gazar Chuluun Uul, located in Gobi-Ugtaal and Bayanjargalan soums of Dundgovi province, is the largest part of the Great Granite Region of Mongolia. It is one of the most beautiful places with its sharp peaks and remnants of cliffs. It was taken under special state protection by the Parliament Resolution No. 30 in 2003 in order to protect its natural beauty and geographical features. It is located 80 kilometers southeast of Mandalgobi.

The Great Land Rock consists of two parts that run for about 20 kilometers from north to south, the highest point being Mount Erlog, 1706 meters high. The granite cliffs of the mainland are composed of bright pink, coarse-grained crystals with various longitudinal, vertical, and transverse fissures. It is located 80 kilometers southeast of Mandalgobi. There are more than 40 caves in the Ikh Gazar Stone Zone, including Toonot, Aguit, Ekhiin Umai, and Rashaant, which are located in a separate granite cliff in the eastern part of Ulziit and Sumber Mountains. The cave is located on the southwest side of the granite cliff.

Bat-Ulzii soum of Uvurkhangai province has the largest waterfall in Mongolia, Ulaan Tsutgalan. The waterfall is about 5 meters wide, descending from a height of more than 20 meters, about 30 kilometers west of the soum center. Some people call it “Orkhon Waterfall”. But this is a misnomer. This is because the Khangai Mountains, such as the Khyatruun and Ulaan rivers, which originate from the Khyatruun and Ulaan rivers, formed the waterfall when they flowed into the Orkhon River. The Orkhon River flows through the gorge, which is about 20 meters high, about 50 kilometers from Undur Oyster to Ongotsot Gorge.

The waterfall was created when the Red River descended into this gorge. As the river receded, it eroded the bedrock and moved back about 100 meters away from the Orkhon River, creating a depression about 10 meters deep. In addition to Ulaan Tsutgalan, there are four or five large and small waterfalls in Bat-Ulzii soum of Uvurkhangai province, such as “Orkhon waterfall or small tributary”, “Tatuurin waterfall” and “Tsagaan gol waterfall”.

In the territory of Khutag-Undur soum of Bulgan province, about 80 kilometers northwest of Bulgan city, on the west side of the main road to Khuvsgul. There are four extinct volcanoes called Uran, Tulga, Togoo and Jalavch. Mountains that erupted during the Quaternary, last extinct 20-25 thousand years ago.

Uran Togoo is 1686 meters above sea level, the mouth of the household is intact, 500-600 meters wide and 50-60 meters deep. It is currently a circular lake about 20 meters in diameter and 1.5 meters deep, surrounded by forests. The crater of Tulga Mountain was eroded to the northeast, south, and northwest, leaving three round wall-like heads like three cornerstones.

Togoo Mountain is 1540 meters above sea level, Tulga is 1620 meters above sea level, and Jalavch Mountain is 1560 meters to the west. The mouth of the Togoo Uul household is intact, about 400 meters wide, 100 meters deep, and shaped like a really big sheep’s pan. These mountains were protected by the state in 1965 and covered as a natural monument covering 5,800 hectares.

In addition to larch forests, poplar, aspen and birch grow. There are deer, argali, roe deer, pigs, ibex, marmots, squirrels, brown rabbits, and mossy brown rats. There are squirrels, sparrows, owls, hawks, partridges, and winters, and cocoons come to the Lake of Uran to spend the summer. Reptiles are common in this region. In the cold season, these animals live in the warmth of the deep volcanic steam and gas, ashamed. There are many tombs and burial mounds near Ikh Togoo mountain.

Ulaagchnii Khar Nuur, located in Erdenekhairkhan soum of Zavkhan province, is one of the most beautiful places with unique formation surrounded by sand like the sea.

It is located 45 km south of Sainshand, the capital of Dornogovi province. D. Danzanravjaa, a famous 19th century Mongolian enlightener and nobleman, founded Khamrin Monastery in 1820 at the age of 17 in Uvur Khamar. The monastery was built in 1821, the first year of the Manchu Dynasty. The monastery had four sections: Zuun Khuree, Baruun Khuree, Tsokhon, and Kalachakra, mostly with Tibetan and Mongolian temples.

Noyon Khutagt lived mainly in the eastern part of the country, and in addition to the Lavran temple, Agva datsan, children’s datsan, school and library, there were Khamba, Lama, Shuteen and Nomchi aimags. There was a burial temple of Oidovjamts IV and Luvsandondov VI, and Danzanravjaa and his successors lived in the Lavran temple. It was a two-story building in the shape of a Tibetan temple with a double-walled gate.

Freshwater lake located in Tariat soum of Arkhangai province and near Khorgyn Togoon, one of the nine wonders of the province. The North and South Terkhiin rivers, which originate in the Khangai Mountains, are blocked by hot melt from the Khorgo volcano. On a small island in the middle of the lake, birds build their nests and lay their eggs. Rare birds also live. Nuur Tolgoi is part of the Khorgiin Strictly Protected Area.

See also; 10 Most Beautiful Crater Lakes in the World.

One of the most beautiful places in Altai Tavanbogd National Park is Baga Turgen Falls in Baga Turgen Gorge, Khoton and Khurgan Lake valleys, Tsengel soum. The waterfall originates from the snow-capped mountains and is located in the wild, creating a beautiful natural wonder. The height of the waterfall is 15 meters, which is considered to be the highest waterfall in the province.

The surrounding mountains are covered with Siberian spruce and larch, while the Baga Turgen River gorge is rich in willows and shrubs. In the spring and summer, the Mongolian grayling, a native fish of the area, spawns in the rugged mountain rivers.

Erdene Zuu Monastery is the oldest Buddhist monastery in Mongolia. The monastery is located near the center of Kharkhorin soum, Uvurkhangai aimag, near the ruins of the ancient city of Kharkhorum. This monastery is a World Heritage Site of the Orkhon Valley.

In 1580, Abatai Khan and his younger brother Tumen Khen met with the Third Dalai Lama and promised to build a monastery in his area. The temple is written in a manuscript called the Biography of the Supreme Enlightenment The ruins of Kharkhorum were used to build the monastery.

Later, in 1586-1674, he built three hundred churches and Rigsum Gomba churches. Luvsan-Odser, the third monk of Erdenezuu, erected a stupa at the four corners of the ruins of the old Takhai village wall, which became the foundation of the current wall fence. The monastery was destroyed in the war in the 1680s and was rebuilt in the early 18th century. Between 1701 and 1705, the temples of Ochirdari, the temple of Avid, and the Central Stupa were built. Between 1771 and 1792, Tsogchin Ikh Dugan and the current Lamiran Temple complex were built by Dagvadarjaa, the seventh monk.

In 1796, Lama Dagvadarjaa oversaw the overhaul of Erdenezuu Monastery and negotiated a price with the Chinese firm Yun-da-a to renovate the monastery’s buildings. During the renovation, the church buildings, built before 1796, were repaired, and 50 stupas were erected as a foundation for the ruins of the old Takhai village. Between 1802 and 1813, 56 more stupas and walls were built between the stupas built by philanthropists, nobles, bailiffs, monks, and people. After that, a temple of Dashchoilin province was built in 1803, a temple of Darjaa gomun province and Janchivlin province in 1826. By 1872, 62 churches inside had been completely rebuilt.

Mongolian settlements, as well as a witness to the strict procedures such as where to build a building, similar to the general distribution of furniture in a Mongolian ger, and where to ask for land to build a building. Erdene-Zuu was left only as a museum, and the only monastery in Mongolia was Gandan Tegchenling Monastery in the capital, Ulaanbaatar. However, after the collapse of communism in Mongolia in 1990, the monastery was returned to its monks, and Erdene Zuu became a place of worship again. In 2004, a new Buddhist school was established at the monastery.

Today, Erdene Zuu is a Buddhist monastery and a museum open to tourists. On a hill outside the monastery is a stone in the shape of a man’s penis. It is said that the stone suppressed the sexual desires of the monks and helped them to keep the priesthood (Myagmarsuren.D).

The large desert region in East Asia. The Gobi stretches across huge portions of both Mongolia and China. It’s a rain shadow desert, formed by the Tibetan Plateau. The Gobi Desert is not only famous for dinosaur species discovery, but also well known for its rich natural resources. The Gobi Desert is rich in copper, gold and coal deposits. One of them is called Oyu Tolgoi which is world’s third largest copper and gold mine.