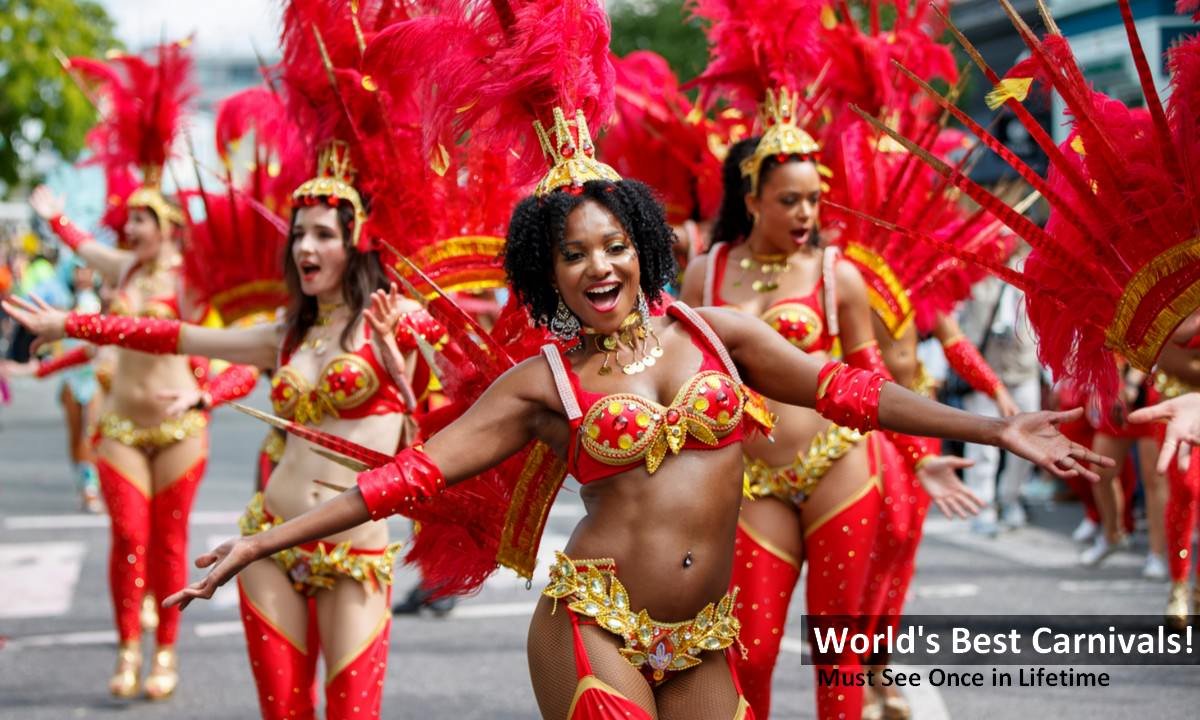 Who doesn’t like Carnivals? Loads of music, street parties, beautiful masks, obscure costumes, colorful parades, gigantic parade floats, its something you won’t want to miss! Here I picked some of the best Carnivals in the world to add into your bucket list to celebrate together the joys of the festival.

10 best carnivals in the world, must see once in lifetime:

Quebec Winter Carnival is one of the largest winter Carnivals that celebrates winter to its fullest hosting festivities like; Night parades, shows, skating and display of massive ice sculptures. Bonhomme has been the Carnival’s ambassador since 1995. Seven feet tall, made of snow, Bonhomme wears red tuque and arrow sash making his appearance throughout the carnival. Every year, an Ice Palace is built for Bonhomme Carnival that serves as a central point for all Carnival activities.

Oruro Carnival is another top tourist attraction, attracting over half a million people every year. This carnival is over 200 years old and is considered an important religious festival. The Oruro Carnival has been recognized by UNESCO as ‘Masterpiece of the Oral and Intangible Heritage of Humanity’.

The Carnival begins with the diablada or “dance of devils” that represents good conquer evil. The carnival is heavily focused on traditional rituals and dances with large number of groups performing different folk dances throughout the carnival.

Carnival of Cologne is Germany’s Carnival king. And, also it is one of the largest and oldest carnivals of Europe. With Six crazy days of partying filled with parades, balls, music bands, food and much more. These six days occurring before lent are called as the “crazy days”. Millions of revelers roam across the streets wearing wackiest costumes, masks and body paints.

Rose Monday is the day when parade of giant floats take over the city with people singing, dancing and throwing flowers to the spectators.

Notting Hill Carnival is a celebration of Caribbean culture that occurs in the month of August every year. Attracting more than 2 million visitors from all around the world, and is considered as the largest street festival in Europe. Major aspects of the carnival are masquerades, sound systems offering all sorts of music, steel pan bands, calypso and soca.

Large number of food stalls can be seen all over the streets. Local organizations or groups build floats to join in the parades. It is a two day festival which does not take place during the usual “Carnival season” before lent.

6. Carnival of Trinidad and Tobago

Also known as the Biggest Street Party on Earth; The Carnival of Trinidad and Tobago is a 2-day festival celebrated before Ash Wednesday. This pre-Lenten celebration attracts thousands of visitors every year. The streets fill up with music bands, soca, calypso, steel bands, limbo, colorful costumed band parades, rum-soaked street parties and what not.

Each year during Mardi Gras, a million of tourists come to the streets of New Orleans to participate in various parades and festivities. The planning and execution of Carnival parades, masquerade balls and numerous street parties are handled by the organizations called krewes. “Mardi Gras throws” is the fun part of the carnival. Throws are the items that krewe members on floats throw to the spectators across the city.

Throws include doubloons, cups, trinkets, beads, toys, etc. Each krewe has its own unique set of throws. The festivities continue until shrove Tuesday.

Nice Carnival is another most famous festival around the world. Attracting millions of spectators of all nationalities every year, organized on the French Riviera. The good thing is, this carnival lasts for straight two weeks offering its visitors creative and eye-catching parades. There are 3 different carnival parades: The Carnival parade and Carnival parade of lights take place around Masséna while Flower Parade occurs on the Promenade des Anglais.

During the Flower Parade, several floats move down the streets with performers wearing colorful Costumes on top of the floats throwing flowers to the crowd. Every year the theme of Carnival changes. There’s a king of Carnival puppet along with the puppet of Queen of Carnival on the place Masséna where all the parades begin. On the last night, the carnival king is burned in the sea followed by fireworks.

Carnival of Venice or “Carnevale di Venezia” is another famous festival attracting thousands of tourists every year securing its place in our top 10 list. Carnival of Venice takes place within the days leading up to lent. The San Marco square is the central location for all the carnival events. The beautiful Costumes and typical Venetian Masks are the major attractions of this carnival.

During the two-week celebration, the city of Venice lights up with a number of events such as masquerade balls, street parties, concerts, performances, parade of boats, and street magic shows, transforming into a magical city. As the carnival is predominantly focused on masks, The Venice carnival most beautiful mask competition is held everyday where the competitors parade through the streets of Venice. The Carnival ends on Mardi Gras or Fat Tuesday.

Carnival of Santa Cruz de Tenerife is claimed as the second most popular carnival in the world after Rio. Attracting millions of people of all nationalities. It is famous all over the world for its colorful parties and Costumes. Its a two week long Carnival starting the celebration by presenting the competitors for “Queen of Carnival” then hitting the streets of Tenerife with the competition of Murgas (Musical groups), parades, singing and dance competitions, Shows, Concerts, masquerade balls, and endless street parties. The Tenerife Carnival is concluded with the Burial of the Sardine on Ash Wednesday.

Also known as “The Greatest Show on Earth”, The carnival of Rio de Janeiro takes place every year in the month of February or march. The festival is celebrated for five days that precede Ash Wednesday with millions of visitors. The most fascinating part of Carnival is the Grand Samba Parades for which top samba schools prepare all year and compete against each year for the title of Rio de Janeiro Carnival Champion and a million-dollar reward.

Sambadrome stadium is the open-air venue or the meeting point of the carnival where tourists are entertained with the parades among the samba schools. However, the Sambadrome parade is not the only highlight of this Carnival! Before and after the main parades, dozens of street parties are held across the city. These parties are more casual than the parades in Sambadrome.