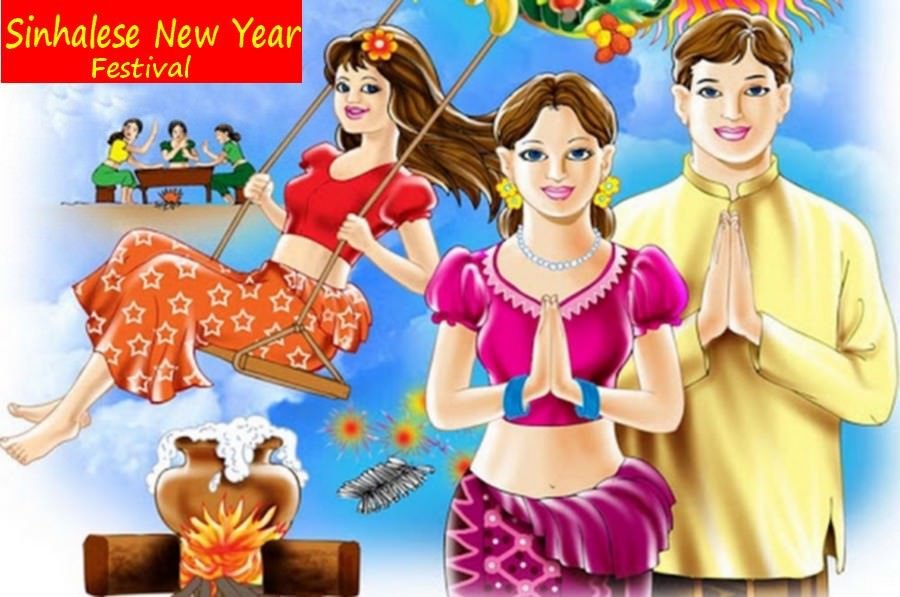 Sri Lanka is a paradise on Earth where its glory and beauty is not only because of the astonishing natural resources it possesses, but also due to its amazing cultural heritage. Sri Lanka has a multicultural society and therefore people celebrate different cultural festivals which indeed add color to their lives. Here are 10 such wonderful cultural festivals in Sri Lanka.

Here is our list of top 10 most exciting and intriguing cultural festivals in Sri Lanka.

Started from the first day of Thai (the 10th month in Tamil calendar); Thai Pongal is one of the significant harvest cultural festivals in Sri Lanka. Mainly celebrated by Hindus all over the country, for 3 days; To pay tribute to the sun for a bountiful harvest, since over 1,000 years. They begin the festival by drawing “kolams” with rice paste in the front yard of houses and also decorating their homes with banana leaves.

They prepare a special rice called ‘Pongal rice’, by boiling milk mixed with rice, jaggery, and spices. Not only to the Sun, which they call as “Surya”; They also pay tribute to cattle and show respect to them as they play a vital role in their agricultural activities for bringing up a good harvest.

This is one of the glorious cultural festivals in Sri Lanka, celebrated again by Hindus. Held in August, September at Nallur Kandaswamy Kovil, Jaffna in honor to Lord Murugan. It is a 25-day long festival. Meanwhile there are many colorful processions are arranged. Men dress in white sarongs, while women wear their best sarees which create a mesmerizing picture in front of the eyes.

The glittering deity on a magnificent silver throne is carried around the town by ardent devotees. Therefore, it is fascinating to see the striking chariots. The 24th day of Nallur marks the biggest night of the whole celebration where a large chariot is pulled by hundreds of men.

Ramadan is the Muslim festival of cleansing and fasting which is usually held for a month. This festival begins at the first sighting of the new moon. For Ramadan season, mosques in Sri Lanka arrange for special places for women prayers, so they can come there and pray the Night (Esha) prayers and the special Ramadan ‘Taraweeh’ prayers which takes about an hour. On weekends, mosques organize lectures done by visiting scholars.

Most Sri Lankan Muslims fast and a majority of them attend prayers at mosques especially during the Ramadan season. Moreover, many rich Muslims distribute their Zakat money among the poor in this month. Ramadan ends with the heartfelt celebration of Eid-al-Fitr festival. People go to the mosque in the morning just after the sunrise wearing new clothes, pray and then listen to a sermon and afterwards give Salaams and hugs to each other as a blessing and this gesture of happiness builds up brotherhood among them.

Hundreds of devotees from across the island come to the holy town of Kataragama in Southern part of Sri Lanka, over a period of two weeks in the month of July, to see the surprising rituals of Hindus done in honor to God Kataragama. Those rituals include skin-piercing and acts of self mutilation. In short, they seek divine guidance from the God Kataragama by doing them.

Other than Hindus, Buddhists, Muslims and Veddas who have faith on Lord Kataragama also attend this honorable event. This festival is also marked by processions of traditional dancers, fire eaters, musicians, elephants and especially includes “Kavadi” dance performances by much faithful devotees which is a much-needed item in the procession. This is held annually to mark the dedication towards God Kataragama.

This is again a fabulous festival celebrated by Hindus in Sri Lanka, who are the devotees of Lord Shiva. They celebrate in commemoration of the marriage of Lord Shiva to Lord Parvati. This is held usually in February all over the country.

They start this with a purification bath. They carry water pots to their local kovils, in order to bathe “Shiva Linga” in milk and honey and cover them in red vermillion to symbolize purification of the soul. Then spend the day fasting and chanting prayers. Many unique and stunning dance and music performances add up more value to it.

The Christmas festive season begins with the beginning of December. But, as all of us know, it is celebrated on 25th December to mark the birth of Jesus Christ in Bethlehem many centuries ago. Along with millions of Christians worldwide, Sri Lankan Christians and Catholics also celebrate it with excitement. Above all, this festival brings together families and friends in an environment of good cheer. The vibrant atmosphere full of joy and good wishes heal the souls together with the cold but cherishing environment.

Homes are cleaned and painted, new clothes are bought and decorations are made; mainly the Christmas tree. Special food items are made including the Christmas cake which is the children’s favorite. Even though Sri Lanka is a predominantly Buddhist country, Christmas is not limited to Christians or Catholics. In many Buddhist homes with children, everyone joins in the festive fun by decorating a Christmas tree and stringing up colorful lights. Likewise, Churches get prepared for Christmas by organizing Carol Services. Moreover people in groups, specially children travel across cities and villages at night to sing carols.

This festival is one of the most eye-catching and magnificent festival. Celebrated by Sri Lankan Buddhists to pay homage to the Sacred Tooth relic of Buddha enshrined at the Temple of Tooth Relic (“Dalada Maligawa”) in Kandy. Perahera means procession in Sinhalese. The spectacular procession of fire jugglers, traditional dancers, drummers, and elephants dressed up in glamorous finery walking down through the streets of the Kandy city.

Every day for a week of the month of August, is an extravaganza for both local people coming there from all over the country and foreigners who come from many other countries. And, it has a long historical significance running up to 4th Century AD.

This is one of the major events which has the highest tourist attraction in Sri Lanka. Not only the procession, there are some other unique rituals, including “Kup situweema”, performed at auspicious times. Many pieces of literature have been created on this important and fantastic ceremony in order to emphasize the significance of it.

This festival marks the dawn of the Lunar new year and the atmosphere totally adapts and changes to welcome it. This is usually held in mid-April. And the festive season is vividly supported by various unique rituals and celebrations with plenty of tasty food and joyful games. This is celebrated across the country by Sinhalese and Hindus.

The whole island comes alive with striking festivities and an energetic spirit. All gather together to perform the rituals such as blessing their children with herbal oils, having the first home-cooked feast of the year with family and visiting parents and grandparents.

All these are done during the auspicious times. The fun quotient comprises setting of firecrackers, playing traditional games and include traditional dance and music performances. This teardrop island becomes exciting in those days, filled with hope, joy and happiness.

The second most important cultural festivals in Sri Lanka celebrated by the Buddhists. It is the poson poya festival, which is held in June. It commemorates the advent of Buddhism in the island in the 3rd century by Arhat Mahinda at Mihintale during the reign of King Dewanampiyathissa.

This is how it happened. King Devanampiyatissa was running after deer for hunting on that Poson Poya day. Many centuries ago, when Arahant Mahinda appeared to him in a grove a top the mountain now known as Mihintale and called him by his name. The King stopped chasing after of the deer and answered riddles about a mango tree and family which the Arahant Mahinda asked him. Then, he listened to the teachings of Arahant Mahinda and agreed to follow the teachings of the Lord Buddha.

Thereafter, he declared it as the state religion. That’s why Sri Lanka is considered the home of Theravada Buddhism. The elegant celebrations include lanterns, pandals, and alms-stalls across the island in the real spirit of the Buddhist culture. White-clothed pilgrims observe sil and spend the day in Buddhist temples with peaceful minds by engaging in dhamma preaching, mediations and other programs to make people aware about Buddhist teachings.

Vesak Poya is one of the most remarkable Buddhist cultural festivals in Sri Lanka. Celebrated in commemorating the three important milestones in the life of Lord Buddha- birth, enlightenment, and parinirvana. Simply it is the triple celebration of Lord Buddha. As in Poson Poya day, Buddhist pilgrims in white, observe sil, offer flowers and light oil lamps, engage in meditation programs and other Buddhist preachings done by Buddhist monks. Learn what is Vesak festival, and how do Buddhists celebrate Buddha Day or Wesak?

Celebrations begin on the Vesak full moon poya day, in the month of May. And, they continue up to about a week. During the time filling homes, temples, roads and shops with the magical light of colorful lanterns and pandals. Truly, the island becomes a kaleidoscope of elegant celebrations specially around the Beire lake in Colombo. The sale of alcohol and fresh meat is usually prohibited during the week period of Vesak celebrations in Sri Lanka.

If you wish to travel to country, it is worth witnessing at least one of these vibrant cultural festivals in Sri Lanka. Because, it will become an unforgettable memory in your life!