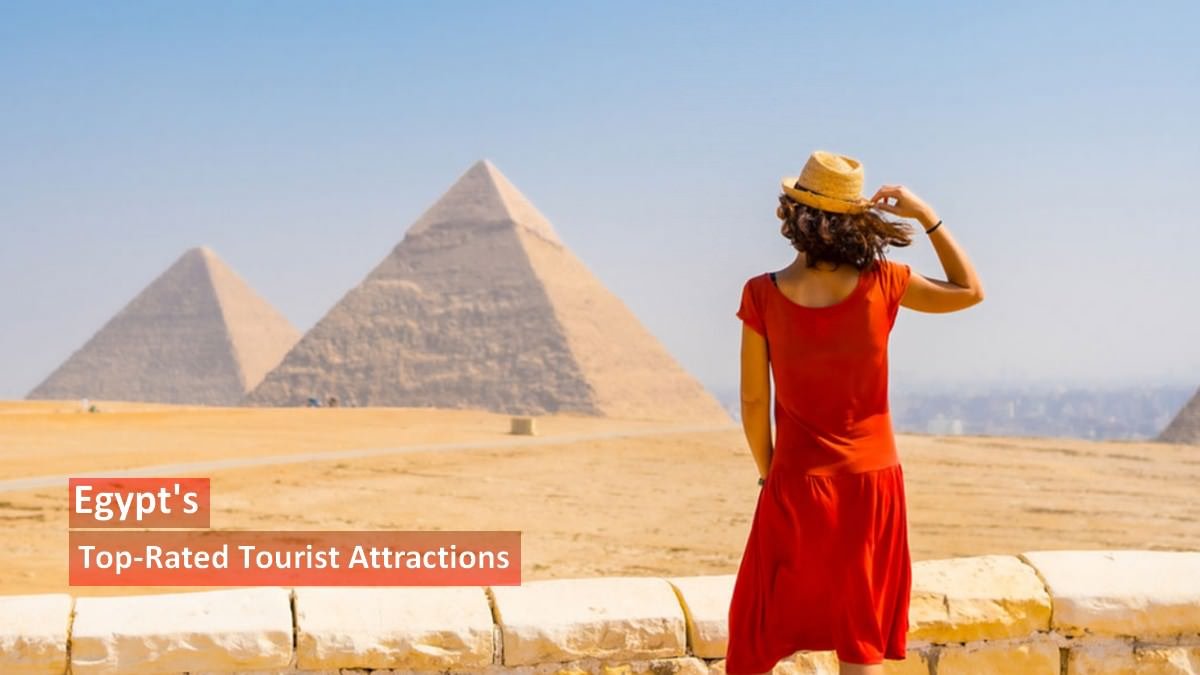 Do you dream of finding yourself in the time of the Pharaohs? We have selected for you the most beautiful best places to visit in Egypt. We are all in search of our roots and the study of ancient civilizations upon entering college often arouses a passion that drives us to explore the countries that formed the cradle of modern times.

The use of writing in Egypt, more than 5000 years ago was the major element of their development and allows us to understand today the messages left a long time ago. In Egypt, testimonies of the greatness of these first civilizations are still particularly numerous and continue to surprise us with their majesty. We invite you to discover the most beautiful of them and the setting in which they are located.

In the 1960s, when the Egyptian government decided to build the Aswan Dam to regulate the devastating floods of the Nile, the problem of the disappearance of a large number of temples arose. A great international movement was born, the main purpose of which was to save Abu Simbel and his royal colossi.

As we are in Egypt, it took a Pharaonic work to cut the 2 temples into blocks of several tons and reinstall them 100 m higher. The result is spectacular, especially since we have taken the precaution to respect the same orientation, which allows the sun to penetrate to the bottom of the temple, twice in the year. Located at the extreme south, the site of Abu Simbel is definitely to be included when you want to visit Egypt. It is all the easier since an airport has been built next door.

The city created by Alexander in the 300 BC. Then enlarged and magnified by Ptolemy is the most European of Egyptian cities. Even if it lost the lighthouse which was its emblem, and whose scale and sophistication earned it to be among the 7 wonders of the world, Alexandria still retains many ancient monuments.

Became an influential port in the 19th century, it has seen very elegant buildings flourish, which can be admired during the unmissable Corniche promenade, which goes from Pointe Silsila to Fort Qaïtbay. Do not miss either the visit of the new library, inaugurated in 2002, worthy of its disappeared ancestor, which shone on the ancient world.

If you are looking for an authentic village, far from the tourist crowds, make a stop at Qoseir, on the edge of the Red Sea. Formerly an important port, when the Suez Canal was not yet pierced. It has retained its charm, with its pretty Ottoman houses by the sea.

You can also visit an old fortress and an 18th-century mosque. Here, you will have real contacts with the villagers, without them reaching out to you for possible alms. You can make it your home port and then radiate to Luxor and the Valley of the Kings.

Aswan and its islands

The rocky dimensions of the Nile from cataracts, which are six in numbers. The first is located at Aswan, at the gates of Nubia. The landscape here is particularly striking: The blue waters of the Nile wind between the green islands which face the city.

These are Kitchener and its botanical garden, Elephantine and the temple of the god Khnoum, Séhel and its steles. They are as many invitations to join them aboard a felucca, this sailboat that you have to borrow during any visit to Egypt.

Cruise on the Nile

The highlight of any visit to Egypt is, Nile Cruise vacation without question, the discovery of the main sites from a boat gliding on the Nile. From one day to more than 3 weeks, cruises on the Nile are an opportunity to admire and visit the most beautiful places in Egypt.

You can leave from Cairo or more probably from Luxor, to discover Karnak, the Valleys of Kings and Queens, Aswan, Abu Simbel and sleep onboard a comfortable cabin.

Most of the best places to visit in Egypt are along the Nile or the Red Sea, but the desert also has wondered. The most spectacular is probably the white desert.

To see these sparkling white limestone concretions appear in the middle of a sea of ocher-colored sand is an unforgettable scene. Make sure you have enough space on your photo card, as you are going to want to immortalize these rocks which take fantastic shapes.

More than a temple, Karnak is a huge religious complex, whose construction has taken place over 2,000 years. The city contained all the buildings necessary for the life of the servants of the supreme divinity.

The visit goes back in time because over the centuries, buildings have been destroyed to erect new ones. At the entrance, the first pylon already imposes with its 113 m of the facade. Plan to visit at least 2.5 hours to admire the temples, colonnades, obelisks and shrines, each more imposing than the other.

Difficult to visit Egypt without spending at least a day visiting its capital, Cairo. You can start by going up to the Cairo Tower, in order to have a panoramic view of the city. Take a walk in the old city, get lost in the maze of the souk Khan al-Khalili. And spend a good part of the day at the fantastic Cairo Museum, where you will be able to perfect your knowledge of the ancient world. And it is from Cairo that you will be able to discover the Pyramids of the Giza plateau.

Temple is still as imposing. The Sphinx alley already makes you dizzy, and you really feel small at the foot of the immense columns of the court of Ramses II and the monumental statues of the famous sovereign.

This completed the site laid out by its predecessor Aménophis III, whose courtyard, the temple and the chambers for births and offerings, as well as the Chapel for Signs, are also visited. A must visiting place during any visit to Egypt!

Hurghada and the Red Sea

Between two temple visits, it is good to go and relax by the sea. If you also want to enjoy superb diving spots, then Hurghada is the place to go. Fishing port converted into a tourist area with many hotels. This city enjoys a long sandy beach and offers a sublime landscape of islands surrounded by perfectly transparent water.

The coral reefs, which are the subject of protection, are all opportunities to practice diving. Are you a beginner? No worries, here you will find many schools that can initiate you. And if you are not tempted, try snorkeling. You will be amazed by the spectacle of fish of all colors.

A visit to Egypt cannot be complete without discovering the Sinai Peninsula. It’s desert and its extraordinary geology. Landscapes of dunes and palm groves coexist with high pointed peaks, like that of Mount Sinai, also known as Mount Moses.

In this high place of Catholicism, you can visit the Monastery of Saint Catherine. On the way, it is not uncommon to meet nomadic breeders of goats or dromedaries, who jealously guard their ancestral culture. Admire the magnificent women’s clothes, the colors of which indicate status.

Sinking into the desert, towards Libya, the path is dotted with Oases, relatively distant from each other. Dakhla, in the south, is the largest of them. Many small villages have been created on its edges, including that of Dakhla, which has 4,000 inhabitants, most of them Bedouins.

Here, the aridity of the desert stops and gives way to greenery and varied cultures; Olive groves, palm groves, cereal fields, orange and apricot trees, to name just a few.

After the rescue of the temple of Abu Simbel, the world began to dream of a similar operation to rehabilitate the island of Philæ and its temple of Isis. This was indeed regularly under-water because of the first Aswan dam, erected at the beginning of the 20th century.

The temple was therefore moved to a neighboring island, with higher relief, during the 1970s. We can therefore again wander around the temple complex and its annexes.

What would a visit to Egypt be without visiting some of its pyramids? There are about a hundred, whose construction spanned from 2,700 to 1,550 BC, with evolution in architecture over time. The oldest was erected in Saqqara, near the ancient capital, Memphis.

Designed by the architect Imhotep. It was intended for the sovereign Djoser, founder of the Old Empire. It is a step pyramid, in the center of a complex which includes many mastaba (tombs of individuals). Open to visitors and which allows you to imagine the life of the time.

The Giza plateau, not far from Cairo, includes the 3 pyramids of Khufu, Khephren and Mykerinos. Also, these were built around 200 years after Saqqara and are of the smooth type. This is where you can see the famous and imposing Sphinx.

It is possible to enter the interior of the pyramids to go to the burial chamber. You will have to walk bent in the gallery that leads to it. But the impression is striking, you should not miss this!

Valley of the Kings

Around Luxor is the vast complex of the Thebaine Necropolis. The kings gradually abandoned the construction of pyramids for tombs dug in the mountain. The Valley of the Kings contains a set of 63 burials, also the last of which was discovered in 2006.

It was there that the tomb of Tutankhamen was discovered, most of whose objects are found in the Cairo Museum. Better to devote the visit to the most richly decorated tombs, like that of Ramses III. The entry ticket gives access to 3 of them, each with its own specificity.